I started to read another book since Thursday - "SOLO FLIGHT: Embracing the Single Life and Discovering God's Purpose", and just this morning I finished the first part.
Although I'm not yet done, I just want to share you what's the first part all about, my thoughts and my experienced while I'm reading it.

Single women come in all shapes and sizes among there's the: workaholic who said "I do" to her career; the overburdened older sister who acts as the family's breadwinner; the hopeless romantic waiting for her knight and shinning armor 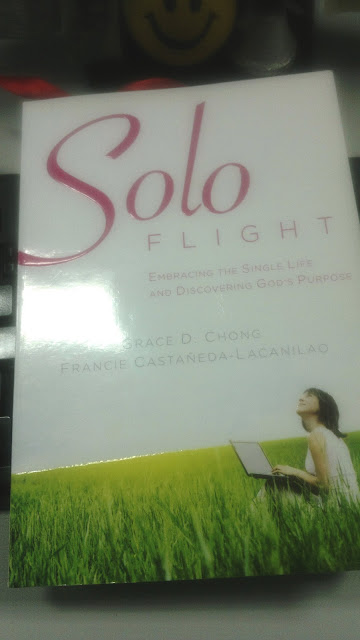 The first part of the book is a true to life story of one of the author herself.  My expectation was she is is just in the early 30s or 40s but she's single for 53 years of her life.
I can't help to smile while I'm reading this morning inside the coaster, buti na lang natutulog yung mga nasa bus baka isipin nila book lang ngumingiti na ako..hehehe OA lang.
Teacher Francie is a born again Christian who runs their two schools - kindergarten and elementary, college professor, active in alumni in UP, engaged in their church ministries - kulang na lang maging wonder woman sa kabusyhan si teacher Francine...dito pa lang napangiti na ako, although I'm not busy as her but it some ways we're the same.
Her prayer prayer: to find a CHRISTIAN boyfriend, someone who can be her life partner.
At the age of 26 people are teasing her already why she doesn't yet marry yet ...paano kaya e wala ngang boyfriend. She continue her prayer to the Lord, and the answer is to be patient.
She turned 30, he met a man that everyone approved for her; a man that for others is really an ideal - good looking, highly educated, from a well known family, with attitude (mabait, magalang, etc.) almost perfect na and even both families are agreed so in short wala ng problema, but Francie and that guy doesn't have the same faith.
"Ija, dapat ba talaga pareho kayo ng faith?" - Dad of Frnacie once asked. Sometimes one of the pressure of single Christian men and women are the people who are always asking same question over and over, hindi lahat ng tao naiintindihan ang reason natin, but if you explained it to them sila na ang magsasawang magtanong ng magtanong ...trust me subok ko na yan, hahaha
While I'm reading I can't help to relate myself to her. At the age of 24, I already made up my mind that I'm going to settle to have a family of my own at the age of 33, surprisingly I read Francie has the same..what's on 33 nga kaya. My mom get married at 33, I just found it when I told her na if God's permit I want 33 to my settling point.
Back to Francie, she turned 33 but still no "comet" came, it seems God answered her prayer in a death sentence. The guy still continue to visit her, but she keep her stand. She liked the man but not enough to consider as life partner.
"Why do you make being a born again Christian as your requirement? Its hard to find decent man nowadays?"
"Be not equally yoked to the unbelievers" -2 Cor.6:14
Francie chose to obeyed God.
At 39, Francie met a guy from one of her seminar in UP. It seems that they end up being together - if kung iisipin mo parang serendipity talaga. They had a "pseudo" relationship, people thinks that are into a relationship pero wala naman, they exclusively dating and call each other, visited each other. Imagine the airfare na ginagastos nila just to visit each other and call each other - the guy is based in US.
After 14 years of friendship and fervent prayer of Francie, the comet accepted the Lord as his personal savior. Plantsadong planchado na, eto na yung bigay ni Lord. One of the pastor who happened to be Francie's friend talked to her one day and said that he will not officiate the wedding. The Pastor doesn't believe in divorce- for him the marriage must be dissolved only if one party died already. Francie pray until she accepted that the "comet" is not really meant for her. Although the comet is still around the galaxy, appear and reappear on the scene.
They remain friends. For me friendship is one of the important factor in any kind of relationship.
Francie received a call from a couple friend - the man is a Pastor while the wife is a church minister also. They told to her that they will introduce someone to her. At the age of 53, imagine that a blind date at 53...hehehe. Well, the case was the guy is based in US and he only call her almost everyday, he is a widower with children, his wife died in cancer and one of the last request of his wife is to re-marry again. Francie met the daughter, she's the one whose bringing gift of her dad to Francie, they become friends. Although no formal "yes" it seems that they are into a relationship already but never meet faced to faced. After few years, the man finally back to Philippines to see Francie, he and his daughter went to Francie's house - hug and kiss her on lips on the first meeting :)
After was a lunch date, the man says "I love you and I will marry you" ...o di ba hindi man lang "Will you marry me" hehehe
Three months later, January 4, 2003 they get married - Francie was 54 then and man is 67, his a pastor by the way.
The Lord's time is perfect, sometimes akala natin yung nasa harap natin yon na, sometimes we're thinking its already the answer to our prayer pero hindi pa pala mas maganda pa pala more than we expect.

Here are some of the points I learned from Teacher Francie's story:
1. Pray pray pray. Prayer is really an important part of our lives. Be specific on your prayer - you want someone who has the same faith as you or you want someone who will help you to grow as a Christian.
2. Patience is really a virtue. Wait patiently on God's answer. Remember that patience is not only waiting to achieve the time frame you set but it is your attitude while waiting.
3. Never compromise. Never compromise your beliefs, your faith and your covenant with the Lord. There will come a time that you'll put into test so its up to you whether you'll give in or you'll continue holding to God's promises.
4. Be friendly. Be friendly even to your "past" - past boyfriend/girlfriend even to your suitors na binasted mo or sa mga niligawan na binasted kayo.  The world is small and round, tomorrow or in the next day you'll bump each other again, kung hindi maganda yung paghihiwalay nyo, think what will be the scenario kapag nagkrus ang landas nyo.
5. Be open minded to suggestions. Like Francie when she first introduced and date to "comet" and when her number was given to Pastor Mike. To admit it or not sometimes we're fearful kasi naiisip natin baka madisappoint lang tayo or madisappoint lang natin yung mga taong ipapakilala sa atin...e ok sana kung katulad ng kay Francie ang ending what if hindi...so balikan mo si #4 then gawin mo ulit ang #1 at #2.

Being single is not a curse, for others its a big deal. I am on my 32 and never I regret being single at my age, I considered it as a blessing. Sometimes iniisip ko kung hindi ako single hindi ko nagawa at magagawa yung ibang mga nagagawa ko ngayon, sympre having a family iba na ang focus mo.Iniisip ko, siguro sabi naman ni Lord "sige anak magenjoy ka muna ngayon, maging blessing ka rin sa iba at gumawa sa ubasan ko and in time ibibigay ko rin sa'yo si life partner".
Being single doesn't mean you're not complete, having a partner is just a "bonus" for oneself. Its up to us how we will enjoy and manage ourselves.

"Delight yourself into the Lord and He will give the desires of your heart.." - Psalm 37:4

*If you want to have the copy of the book you can check PCBS (Philippine Christian Bible Society) bookstore or you can visit OMF Literature Inc.