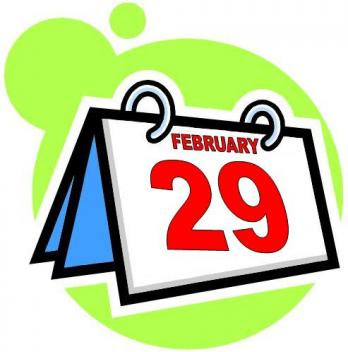 Today marks down the leap year day, February 29. Instead of 365 days in a year, 2012 has an additional one day.
Leap year (day) is one of the day out 366 that full of superstitions. Personally, I don't believe in superstitions but just for fun here are some of the commonly superstitions that usually practice in some countries during February 29.

Women proposed marriage to their men.
If you watched the movie "Leap Year" then you'll know the exact scenario. Usually woman in a long term relationship do this.
I can't imagine myself doing a proposal to marry me; even you're in a long term commitment with your boyfriend I think he has a reason why he don't ask you yet to get married and whatever reason it is, you need to find it out. There are some guys who are just zipping their lips and not to brought out things but deep inside they want to be out in the relationship - I'm not talking in general, of course there are some that not yet really ready for a married life.
So if you're one of those ladies who are in the LTR, and waiting for a proposal from your boyfriend, instead of proposing for him to marry you, just talk to him and directly bring out your concerns about your feelings and expectations. Another note, long years being in that relationship is NOT an assurance that you'll end up together. On the other hand, I know so many successful marriages that they stayed as boyfriend-girlfriend on for few months and got married after. Years being together is not really a basis for a long lasting relationship.

Men are expected to pay penalty such as gown or money when they refused the marriage proposal from a woman during Leap day.
Well, men beware! what if that woman just want a new dress or money and the easiest resource is you. but although we don't have that kind of practices there is a semi counter part that we called "pikot" or seemingly shot gun wedding.
I say, no shut gun wedding will be held, if the man doesn't do anything or caused anything for him to force to marry the woman. Guys, if you doesn't really love the woman don't play her feelings; don't put false hopes to her; don't make promises either because maybe in the end you'll pay for it. As I heard one of my friend "digital na ang karma, sometimes wala pang 24 hours bumabalik na".

For some other countries like Scotland and Greece, leap day is unlucky day just like Friday the 13th, but for me it is an additional day - a day full of blessings that needs to be thankful of.
Let's make this day a worth remembering day - an additional day in a year that was given to us to enjoy and give our best to have a blast.

Happy 29th of February
And by the way its Wednesday ^_^ my favorite day!