I get curious to know who's the richest Filipino people when I read the top 5 richest Hollywood actress the other night. Although I don't really know some of their names, my interest is to know on what kind of businesses these persons are engaged and who's the youngest of them all.
Every year Forbes magazine and as published on their site issued top richest people in every countries and top billionaires in planet earth.
This is what Forbes stated on how they rank the top richest people "We do not include royal family members or dictators who derive their fortunes entirely as a result of their position of power, nor do we include royalty who, often with large families, control the riches in trust for their nation.  Over the years Forbes has valued the fortunes of these wealthy despots, dictators and royals but have listed them separately as they do not truly reflect individual, entrepreneurial wealth that could be passed down to a younger generation or truly given away. Our estimates are a snapshot of wealth on Feb. 14, when we locked in stock prices and exchange rates from around the world. If a stock market wasn’t open on that day–as was the case with Taiwan, Saudi Arabia, Shanghai and Shenzhen–the stock price is from the previous trading day."

Who made it on the top 50 of the richest Filipino? 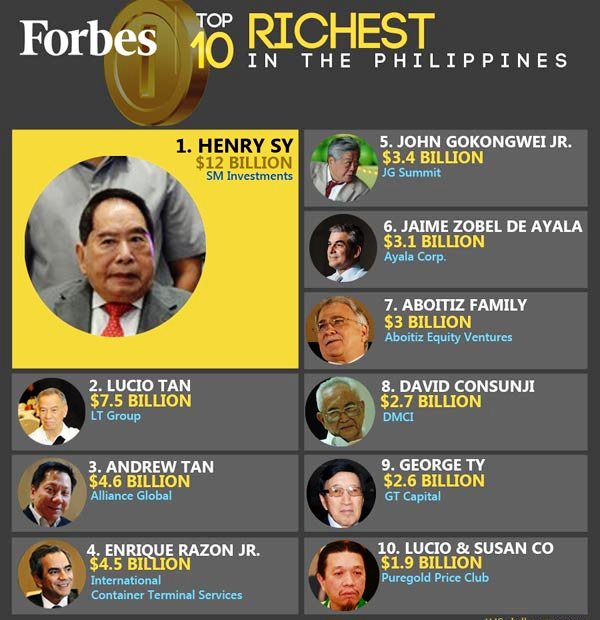 Henry Sy made it again on the top for 6 years straight.  Here are the list of top 50 richest people in the Philippines.

Aside from the wealth they have, another thing that really impressed me is a man at the age of 36 made it on 39! No other than Mang Inasal's founder Edgar Sia II.
Here are some tidbits I've read at Forbes about him.

Grocer's son, Edgar Sia II founded Mang Inasal, a Filipino-style grilled chicken chain which he sold to Tony Tan Caktiong's (No.11) Jollibee Foods in 2010 for $65 million. Still owns 30% of the 500 outlet chain. Last year, he and Tan set up DoubleDragon Properties, to focus on the commercial and mass housing markets. New businesses include a franchise for China's budget hotel chain JinJiang Inns, set to open its first hotel in Manila this year. He also holds a minority stake in the Philippines Bank of Communications, where he is an advisor to the board. Shares wealth with younger brother Ferdinand and sister Rizza.
If maybe he still a bachelor, maraming maghahabol sa kanya, hehehe  but sorry ladies he is already married with 2 children.
Who knows 5, 10, 20 years from now you will be included on the list. May their stories serve as an inspiration to achieve our goals and dream cos I believe even them once in their life didn't expect that they will be made it on the top richest people in the Philippines.
_________

"As for the rich in this present age, charge them not to be haughty, nor to set their hopes on the uncertainty of riches, but on God, who richly provides us with everything to enjoy. They are to do good, to be rich in good works, to be generous and ready to share" - I Timothy 6:17-18