How many storms and typhoons and other calamities and disasters Philippines had been through? For every new storms and typhoons are new fears and worries how to survive and move on to whatever harm it may cause.
The first time I learned about the heavy rainfall I thought it was just an ordinary rain like any other kasi naman rainy season naman talaga sa Pinas but when I called Mommy on Friday August 18, and she told me that is non-stop already. Although we're leaving in Batangas, which is happened to be included in the list of areas where the typhoon will pass I'm not that worried cos I know hindi naman binabaha yung place namin. But like what happened to Ondoy in 2009, just a heavy hard rainfall that lasted in few days and the next day halos buong Metro Manila na ang nakalubog sa tubig.
Thanks to social media sites, even I am away sa Pinas I can be updated on what's going on - from the time they declared that SLEX is not passable already... 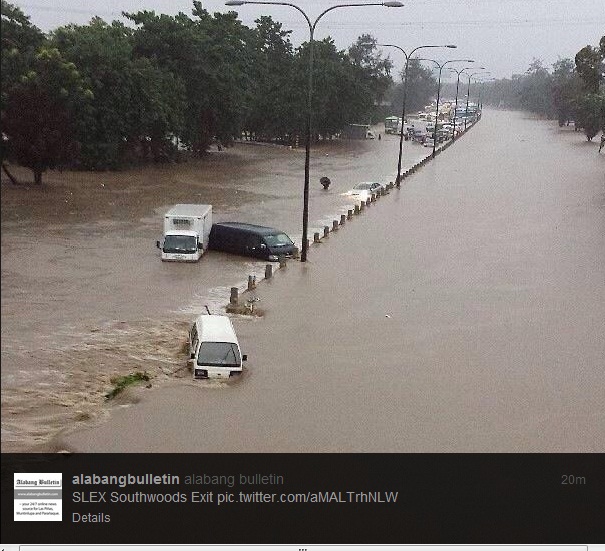 And all the other areas are already drowning in water.... 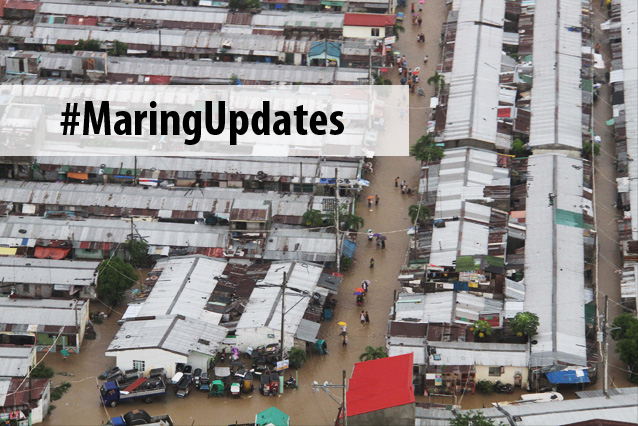 In time like this that the only source I have is whatever I can watch on the net and the initial help I can do is to pray and to share information posted by others. But good thing even we're far in just a click we can help to disseminate information.
Here are some info-graphics I've got from several social sites that can really help a lot. 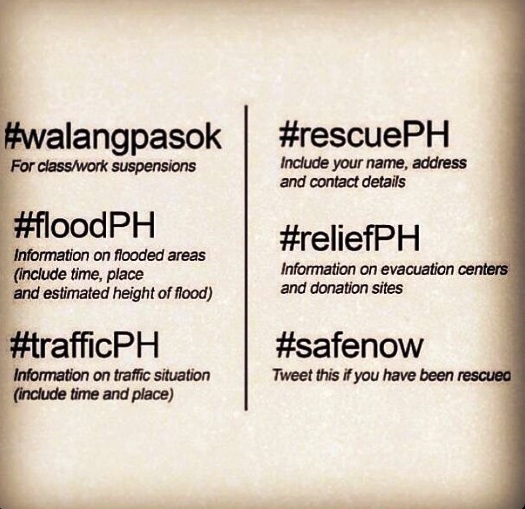 If you want to check all the status or updates posted on each category you can just type for example: http://reliefPH.com
Government officials and some prominent personalities from politics and showbiz used social medias to spread updates too. 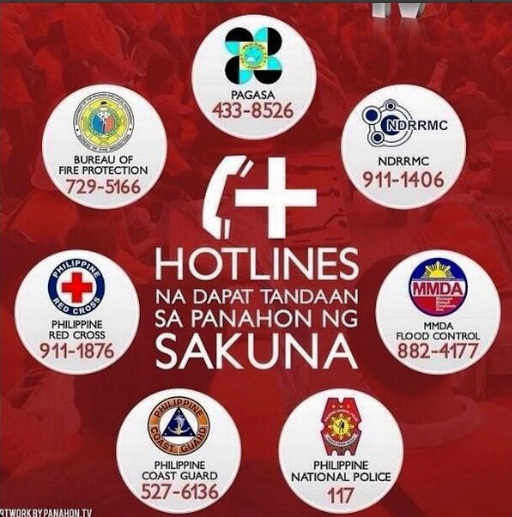 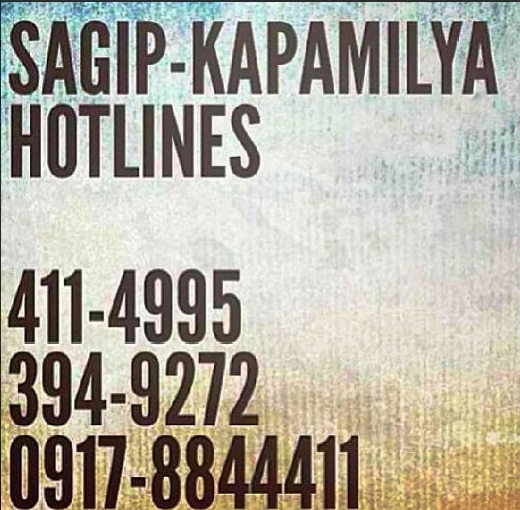 For the complete list of evacuation centers and relief operations, check the link mentioned here: 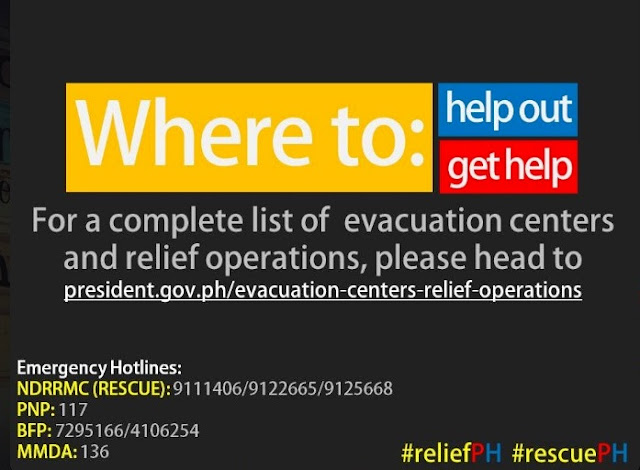 DSWD on behalf of Secretary Dinky Soliman is appealing for help to all volunteers... 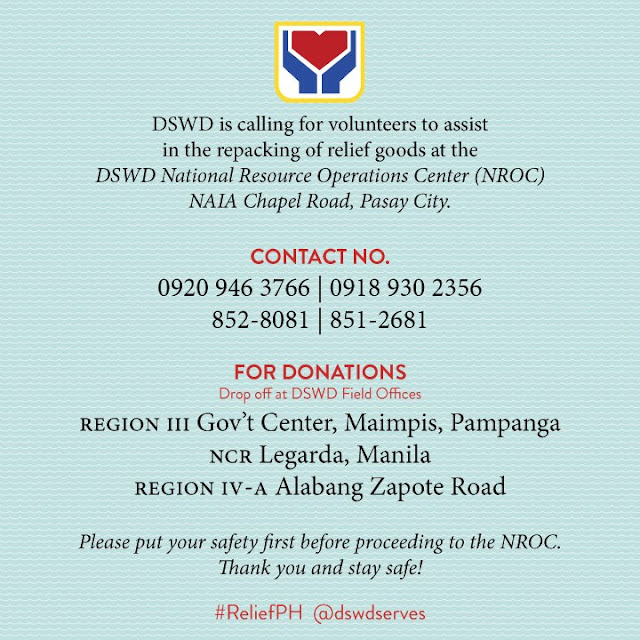 And here's another tips from Rappler.
My personal pasasalamat to rappler talaga kasi talagang updated and detailed ang mga articles nila. More power to you guys! 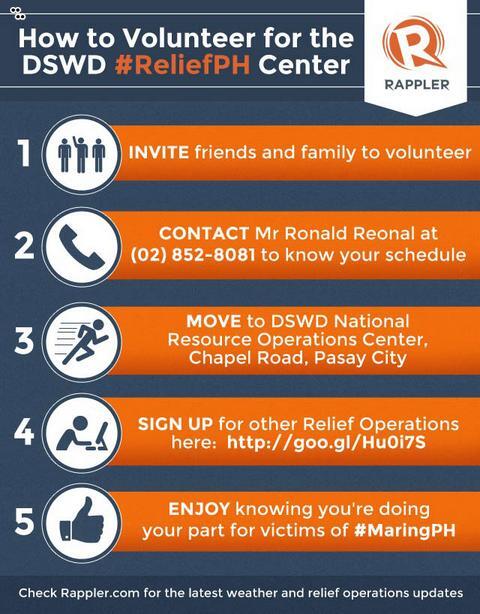 These are only few information that can really help us and our kababayans. It doesn't mean na hindi tayo apektado ng baha or ng ano mang kalamidad is wala na nga lang tayong pakialam. We can do something even in our own little way. By with our fingertips and laptop we can spread information, kung yun ngang mga simpleng jokes lang naiishare at nai-ihashtags natin, e bakit yung mga kapakipakinabang na inpormasyon hindi.
For how many times social medias moved for us. Noong panahon ni Ondoy at ni Sendong nagkaisa ang mga Pilipino, nabuhay ang bayanihan, marami mang nasirang ari-arian at nawalang buhay pero muli nating ipinakita na may pagkakaisa tayo, well let's do it again. By simply sharing some informative  post through social medias and by using hash tags + code we can help, we can save life.
And more than anything... 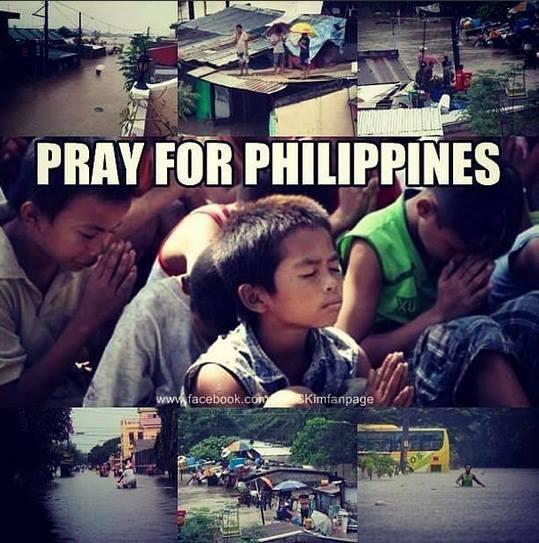 God bless Philippines
God is in control....
Posted by Outspoken Mind at 9:26:00 PM