I though people I've been mingle are all tired of asking me when I will be getting married, as most of the time they asked me the same question over and over. But before the 2011 ends most them are wishing and hoping that on this year 2012 they will hear a wedding bells from me. I usually smiled as I am used to them and those wishes (every year). I know they only want me to be happy  happier. But as I always said I will not enter into relationships just to say that I have someone with me. Pwede kayang magpainterview na lang on national television or magpapublish on top publications just to announce "YES, I AM STILL SINGLE" so people will stop asking me "single ka pa?"  or "kelan ka magaasawa?" But as I've said I'm used to them but there were times na nakakainis na rin.
Maybe people are thinking that if one is single - she's not happy, she's not fulfilled, there's bitterness on her, she's boring and doesn't enjoys life. For those who are thinking that I am that kind of woman, sorry to disappoint you. 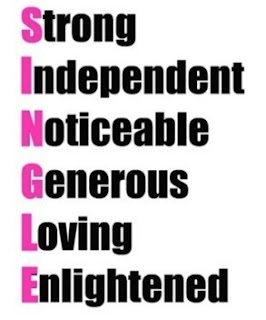 I know I have a "manang" traits on me but there's a reason behind that and I am not staying on those principles because I am compelled to - I just want to stay on that track. I don't want to compromise my principles just to please you guys ;=)
Here are some of the advise I got from Mr. Rick Warren's book; hopefully it can help you as you walk into singleness.

DON'T DATE BECAUSE YOUR DESPERATE.

DON'T MARRY BECAUSE YOU ARE MISERABLE.

DON'T SLEEP AROUND BECAUSE YOU THINK YOU ARE OLD AND KNOW BETTER.

BE TRUE TO YOURSELF

DON'T COMMIT WHEN YOU'RE NOT READY

NO ONE COMPLETES YOU - EXCEPT YOU!

To those people who are keep on asking me when I will be getting married, I will announce it for sure and you'll be invited and just want to say thank you as well for making me subject of your concern every time you're asking when I am getting married ^_^.
Don't get married for wrong reasons. Remember that you'll not the only one who will suffer if you do it for wrong reasons - both of you who are in the covenant of marriage as well as your future children.
Posted by outspokenmind at 11:59:00 AM

Email ThisBlogThis!Share to TwitterShare to FacebookShare to Pinterest
Labels: Inspirations, ME, SINGLE