If there's one kind of food I miss being away from home, that is "isaw" and other street foods.


Isaw is a street food from the Philippines, made from barbecued pig or chicken intestines. The intestines are cleaned, turned inside out, and cleaned again, repeating the process several times. They are then either boiled, then grilled, or immediately grilled on sticks. They are usually dipped in suka/sukang pinakurat (Filipino term for vinegar with onions, peppers, and other spices) then eaten. They are usually sold by vendors on the street corners in afternoons. (from Wikipedia)

Every time I will be coming home in Philippines nakaplano na ang "saw" food trip ko with friends, isama mo pa ang ibang street foods like "balut" "addidas" or chicken feet and "helmet" or chicken head, fish balls, kwek-kwek, etc. Though hindi na lang sila sa kalye makikita ngayon, there are several restaurants na rin that's offering isaw and other street foods on their place kaya kung even ang mga maseselang na tao na ayaw kumain sa tabi ng kalsada they can still enjoy it.
Here in Doha they have different version of isaw, e sympre walang isaw dito kasi wala namang pork dito or kung meron man frozen talaga and you need license pa to avail it and additional factor lahat ng mga food vendor dito need ng health license as a proof na nakapasa yung store/ restaurant or yung food brand mo sa health ministry, pero meron pa rin namang nakakalusot kaya lang illegal yon and definitely hindi pwede itinda publicly.
I heard it several times from my cousins that I should try the "isaw" version in one place in Souq Waqif, and since I'm with them last weekend, we did.
We don't know what exactly the place open so after we roamed around Waqif, we go directly to the place bu its still close. But good thing tables and chairs are not fully occupied yet, we had a chance to take some rest after walking around. 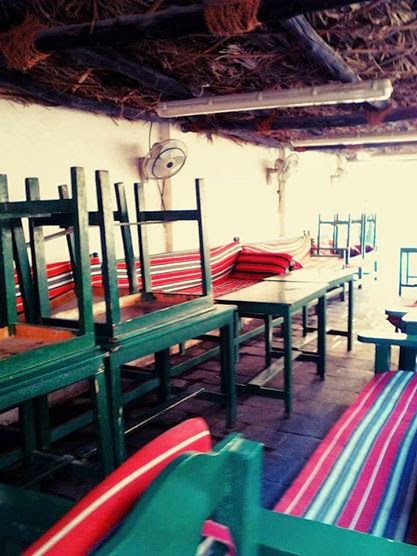 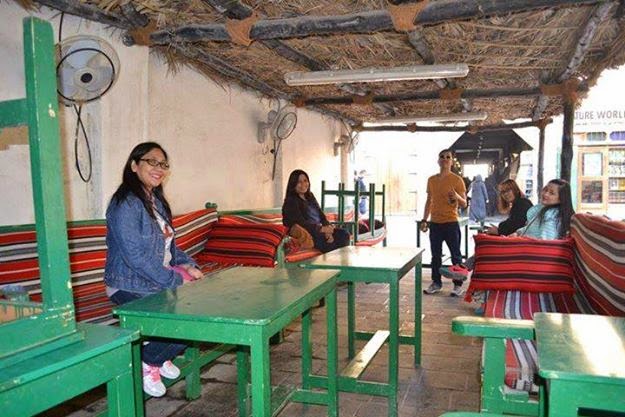 We are informed by the staff that they will open at 4:00 p.m.; we are an hour early so after some rest we walk around again and return after.
Though more seats are occupied on the second time we get back, its good thing we still get a good seat. Near the place were we eat is a bakery. They are selling "pita" bread or what they called here "kobus"; it is a soft, slightly leavened flat bread baked from wheat flour. 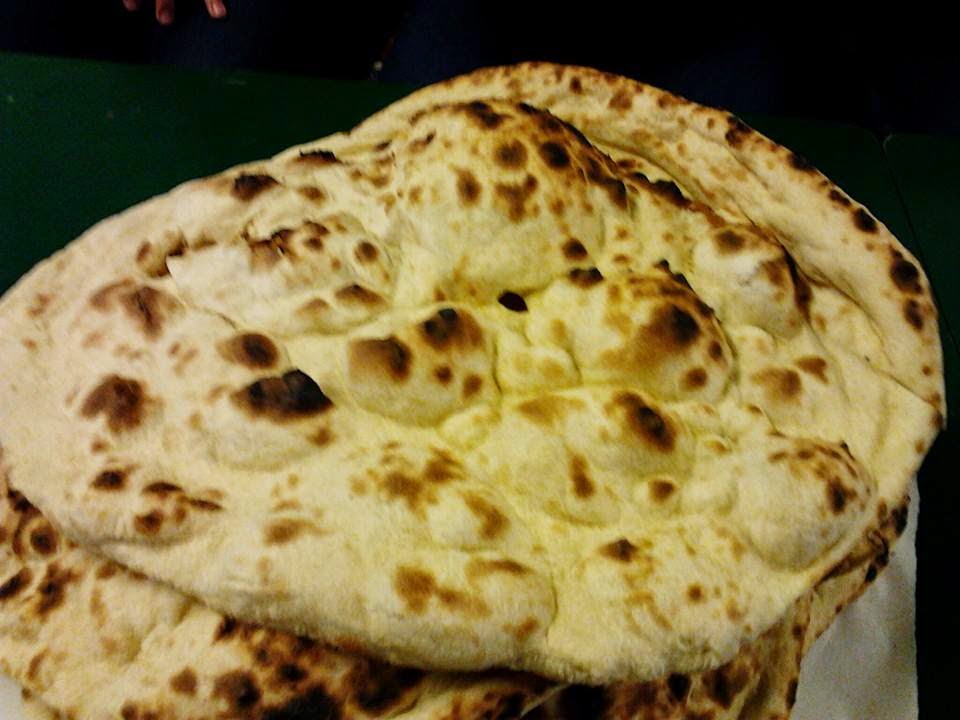 One order consists of 5 pieces big round pita bread which only costs QR1.00. Most of the pita bread now are baked in some automatic machines but in Waqif they are still using the traditional method, if you watched some movies na may mga old Arab settings na isinusuot ang mixture sa isang made of stone na pugon then that's it.
They also have with filling too, usually its filled with greek yogurt or cheese. It only costs QR2.00 per 6 slices. 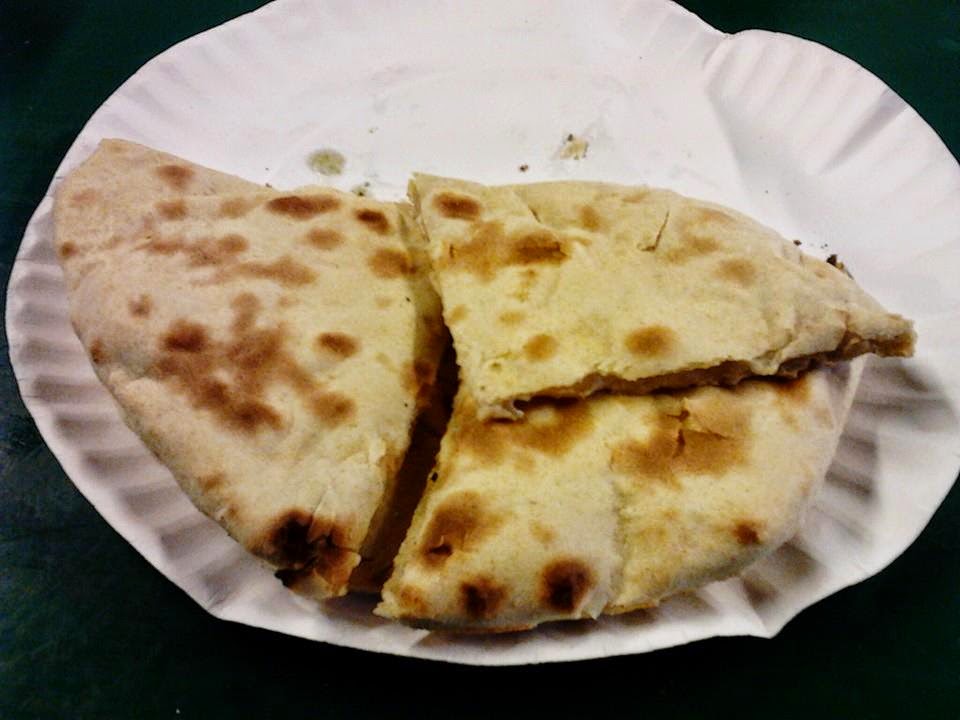 These breads are good to eat while they are hot, you can feel the difference in taste talaga if it baked in "pugon" or if its done thru modern oven. Kaya kahit di pa namin turn na magorder at least di kami nainip masyado at may pampawi gutom na rin. 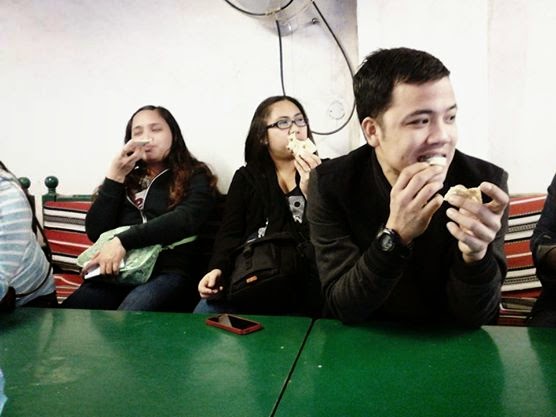 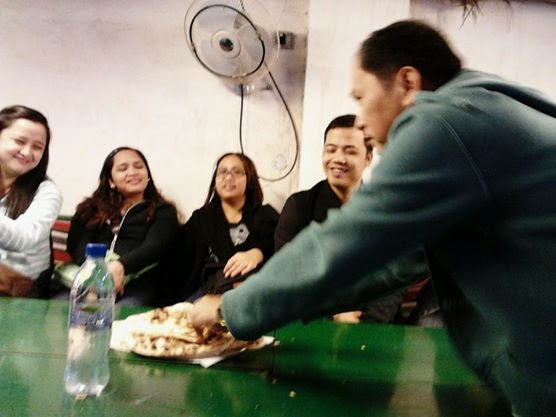 And here we are, its our turn to order! Check their menu prices, isn't it so so so affordable? 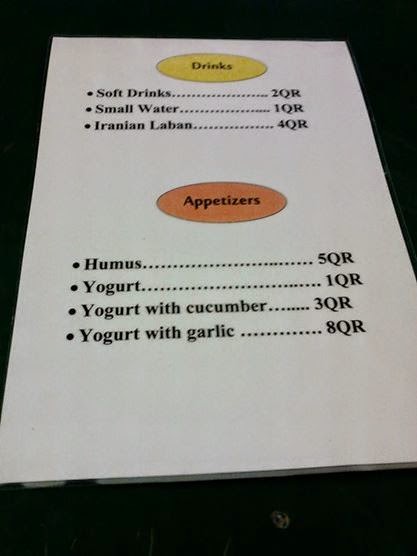 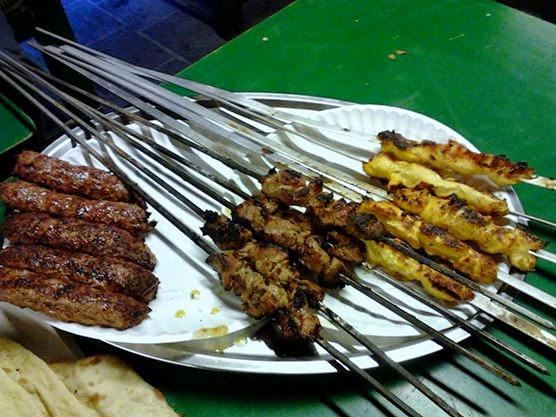 We ordered plate of kebab meat and chicken and plate of kufta. Kebab is skewed in metal kaya reminders kahit anong gutom nyo wag basta basta hawakan ang skewer kasi mainit, pwede nyong gamitin ang kobus or the pita bread na kasama ring iseserve along with your order, may kasama din itong fresh green leaves with lemon, I forgot the name of the leaves pero usually natitikman ko yon sa mga salads, mejo mapait pero masarap. And since we know na baka abitin kami, we order another set.
For the two sets of kebab and kufta, drinks, humus (made of garbanzos and looks like yogurt that serve as a dip) we only paid QR 112.00.  Busog- lusog na naman kami in very affordable price pa. Imagine each of us paid only QR 14.00.
Until we left Souq Waqif super busog pa rin.
I suggest to you na itry nyo rin, isama ang family or friends and enjoy the taste of Arab authentic food in affordable price.
Posted by Outspoken Mind at 12:23:00 PM